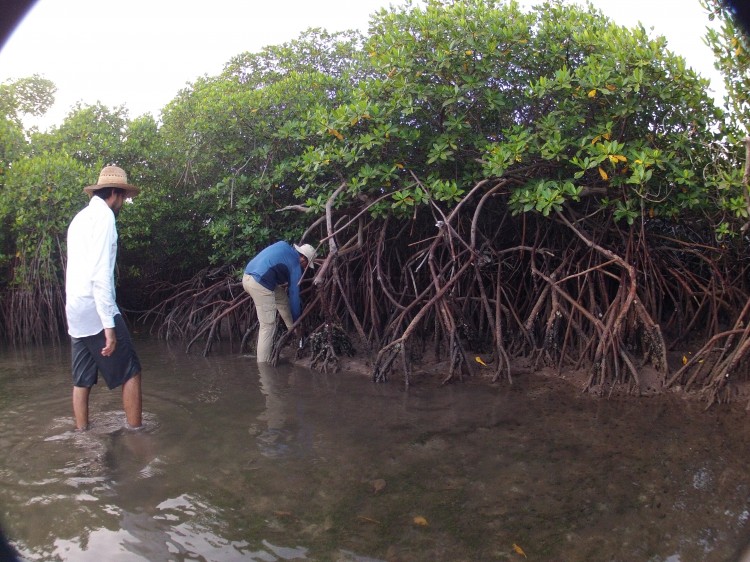 Severely threatened around the world, mangrove forests provide us with many irreplaceable ecosystem services, including nursery habitat for fishery species (1), protection of coastal communities from storm surge damage (2), timber, and ecotourism revenue.  One mangrove service of global importance is long-term carbon sequestration.  Ecosystems that serve as carbon sinks, such as mangroves, remove and store carbon from the atmosphere, where excess CO2 is currently driving global climate change. Among carbon sinks, mangrove forests are particularly productive (3), and store more carbon per area than other tropical forests (4).  Much of this carbon is stored for long residence times in layers of organic-rich sediment, or peat.  Some studies have attempted to estimate stores of mangrove C on a global scale (5), but they do not address the variability in belowground mangrove C storage.

In this study, we assessed C storage in the mangrove forests of the southern Gulf of California. As a previous post describes, we sampled eight mangrove forests ranging in size from two to 96 hectares, both in the forest interior (or “hinterland”) and the fringe at the water’s edge. We used a sediment core to obtain samples, which we dried, ground, and weighed before precisely measuring the amount of C in each sample, ultimately estimating the amount of C stored in the entire forest.

The amount of C stored in a given area, or “C density,” varied from forest to forest, but, contrary to our expectations, larger forests did not generally have higher C densities than smaller forests. Though forest size does not seem to control how densely C is stored in these mangroves, sampling at different locations within each forest revealed more about the distribution of C. Fringe areas had relatively low and consistent C densities, while in the interiors of forests we observed some of the greatest C densities (e.g., 2,786 tons per hectare in one core at San José), as well as some very low measurements. Altogether, the eight forests sampled in this study contain about 156,000 tons of C, providing a valuable ecosystem service.

Conducting broader sampling and bringing a belowground perspective to mangrove research will help in building a global knowledge base of mangrove C pools. As nations take steps to regulate C, this information will enable managers to leverage the services of mangrove ecosystems in global C emission, sequestration, and storage markets, creating strong incentives for the conservation of these valuable but threatened ecosystems.

Thanks to José Cota Nieto, Kira LaFace, and Erin Navarro for invaluable help in the lab and field.