How many gulf curvinas have been caught?. 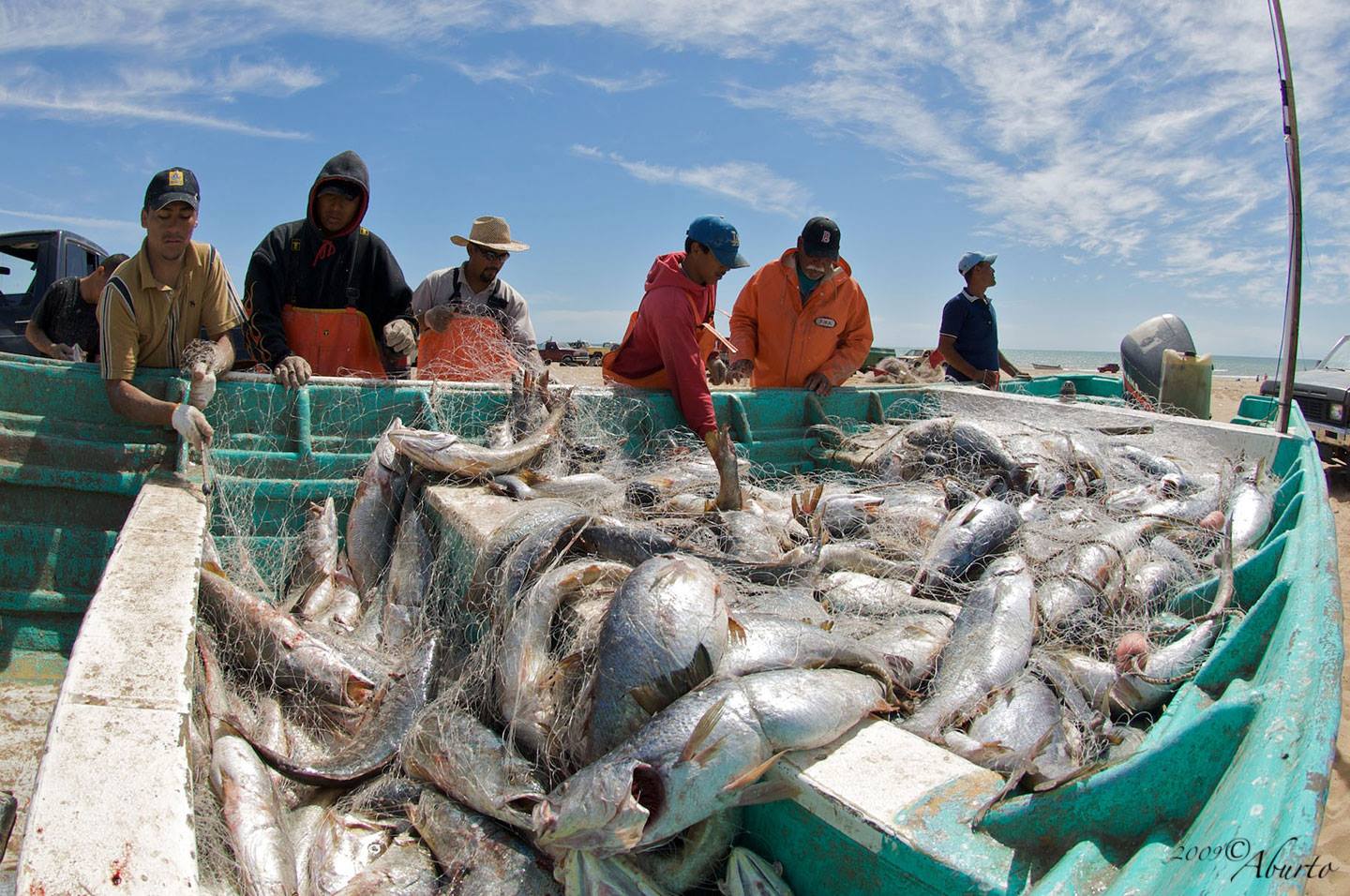 Extraction levels in any fishery should never exceed the species’ capacity to recover (never catch more fish than are born). Yet, how can we know how many fish we can catch if we don’t know how many there are? How do we know the remaining fish population is big enough to maintain the fishery in the long-term? To set effective restrictions on how many fish to extract, management officials need to know how many fish are in the water, and to know this we must know: 1) how many offspring is produced by one pair; 2) how often do juveniles recruit to the fishery population; and 3) weather or not we are extracting more or less than the amount recruited. 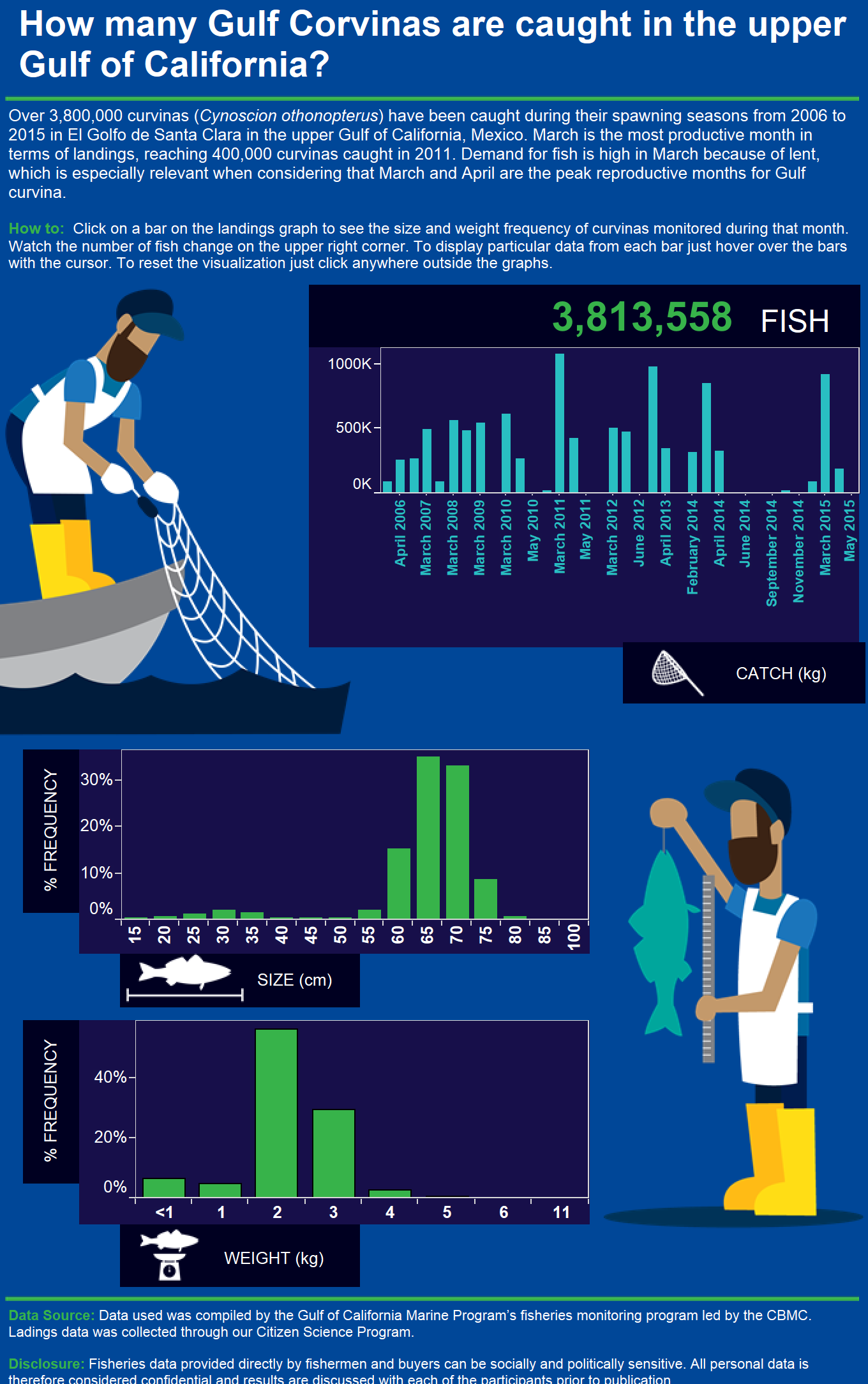 The Gulf of California Marine Program’s monitoring program generates data that will help scientists improve management of the gulf curvina (Cynoscion othonopterus) fishery, including an estimation of how many individual fish are caught per tide and season. Scientists and fisheries managers usually estimate the state of a fishery in terms of the volume landed (kilograms for example) since most of the time, landings records are the only information available (a.k.a. fishery-dependent data). However, this can be misleading because 100 kilos could represent two very large adult individuals weighing 50 kg each, or 100 small juveniles weighing one kg each. Therefore, the team collects data on catch, weight, and length of organisms, and uses this to estimate the total number of individuals caught, rather than just the volume.

Between 2006-2015 over 3,800,000 curvinas were caught during the spawning season in Golfo de Santa Clara; most of them measuring between 60-75 cms (legal size is 65 cm) and weighing 2-3 kilograms. March is the most productive month in terms of landings, and in 2011 almost 400,000 curvinas were caught. After the TAC was established in 2012, the number of curvinas caught during March has stayed between 316,720 and 365,300. Demand for fish is high in March because of lent, and drops drastically once lent is over. This becomes especially relevant when considering that March and April are the peak reproductive months for Gulf curvina (3). While the closed season runs from May 1st through August 31st, a few curvinas (a little over 4,000) made their way into the landing records.

The Gulf curvina fishery helps maintain the local economies in the Upper Gulf of California, so avoiding overfishing is a must (1,3). This is a first attempt to count how many individual Gulf curvina are caught (versus total catch volume) by using landings data from one of the main buyers in El Golfo de Santa Clara, Sonora, and our fisheries monitoring data. Because we can’t count every single gulf corvina that arrives to the Colorado River, we must use available fisheries data generated through our monitoring program and local seafood buyers to make estimates on the total fish population and provide the necessary information to management officials so proper decisions are made .

We thank the fishers and buyers from El Golfo de Santa Clara, Sonora, who helped collect data; thank you to Y. Flores, J. Montañez, J.J. Cota, T. Plomozo, K. Gherard, J. Vazquez and Anabel Espinoza for their assistance on the field. This research is part of a larger effort led by the Gulf of California Marine Program at the Scripps Institution of Oceanography to implement citizen science projects in the region. We are grateful to Environmental Defense Mexico, the David and Lucile Packard Foundation and the Walton Family Foundation for their support.