Recovering fishery resources in the Gulf of California. 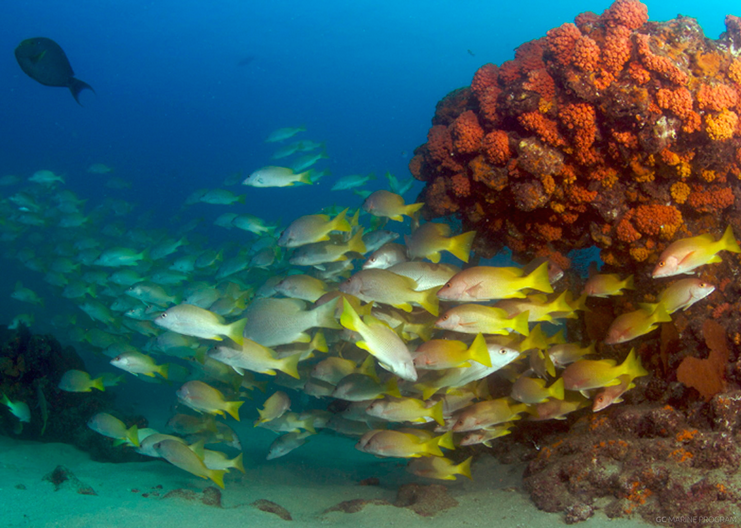 Ocean reefs are a source of food and income for many coastal communities that extract a great variety of fish, mainly for human consumption, like groupers, snappers or parrotfish. Because of this exploitation, many populations of these species have changed in abundance and the reefs have deteriorated (1,2). One of the main tools used to mitigate these changes has focused on protecting reefs by prohibiting fishing activities in affected areas. These areas are known by different names: Marine Protected Areas, Fish Refuges, Marine Reserves, etc. (3,4), but all of them seek to recover marine ecosystems and populations of exploited species (5). 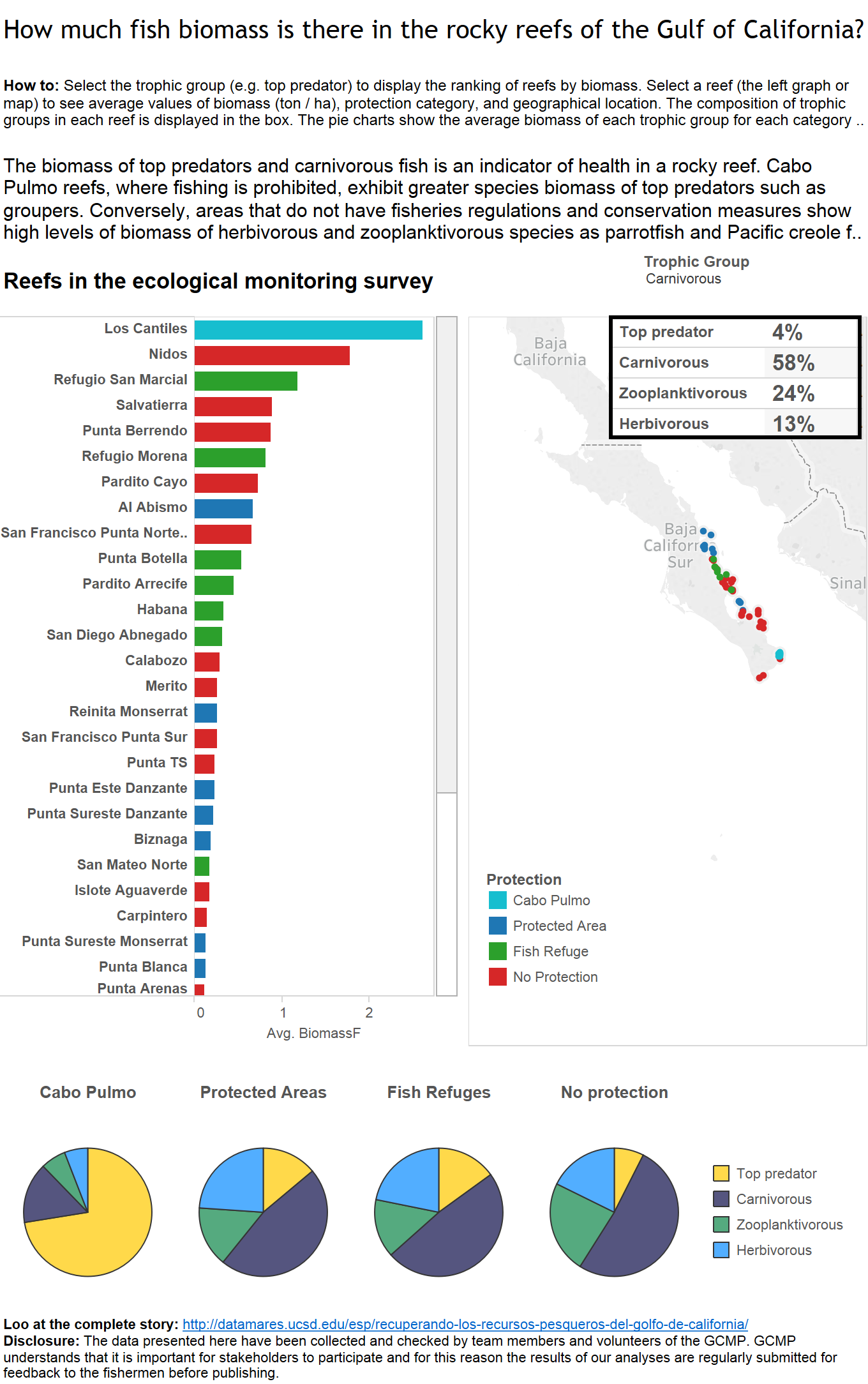 When a reef, or a group of them, is protected and fishing is banned, over time we see changes in the populations of commercial fish species. On one hand, the abundance of the species increases, and most importantly the biomass (the kilograms each individual weighs) increases exponentially (6). On the other hand, with the passage of time we can observe that top predators (piscivores) and carnivores also increase. This is due to the fact that there is more food to consume in the reef and this group of species tends to accumulate more biomass as they are the largest species and live the longest.

There have been two protection categories implemented in the Gulf of California reefs that either limit, regulate or prohibit fishing activities: Marine Protected Areas (MPAs), established by the Ministry of Environment and Natural Resources (SEMARNAT) and the Fish Refuges, implemented by the Ministry of Agriculture, Fisheries and Aquaculture (SAGARPA). Although MPAs have been implemented in Mexico for 20 years, the first fish refuges were implemented in 2012 in Baja California Sur (7), when 13 fishing communities from the region selected 11 sites to become these first refuges (8).

However, are there differences in fish biomass between these reefs with only three years of protection and the reefs within MPAs that have been under protection for several years? How about between these and reefs that are not under any regulatory measure? Using information gathered through the Ecological Monitoring program carried out by the Gulf of California Marine Program in 2013 and 2014, we analyzed the data for four commercially important species of fish from the rocky reefs from the Loreto region, in the central Gulf, to Cabo San Lucas, in the southern tip of the Baja California Peninsula. A total of 60 reefs were surveyed under four categories of protection: Marine Protected Areas (MPA), Fish Refuges, No Protection, and Cabo Pulmo. This analysis includes Cabo Pulmo outside the category of MPA because there has been no fishing activity in 20 years, while reefs within MPAs still endure some fishing (4). The species were selected for being the most common, for their economic importance, and because of the role they play within their trophic level: leopard grouper (Mycteroperca rosácea), a top predator; graybar grunt (Haemulon sexfasciatum) carnivorous species; creolefish (Paranthias colonus) the most abundant zooplanktivore; and the parrotfish (Scarus ghobban), an herbivore.

Major findings:
The hypothesis that a larger biomass of fish (kilos of fish per hectare), mainly of top predators, is possible the less fishing there is was observed in the four categories. 72% of top predators were present in Cabo Pulmo, followed by fish refuges with 15%, MPAs with 14%, and lastly reefs with no protection with 7%. As for biomass of carnivores, the highest was found in reefs with no protection (52%), followed by fish refuges (48%), MPAs (47%) and lastly Cabo Pulmo (15%). Zooplanktivores and herbivores had similar values in the four categories.

Some species are indicators of the good health of a rocky reef (biomass of top predators and carnivores) (4). In almost half of the reefs of Cabo Pulmo a very high percentage of top predator biomass is observed. Even more interesting is that several unprotected reefs occupied the top places in both predator and carnivore biomass. Of the 30 unprotected reefs, the following stood out: Punta Berrendo, San Carlos, Agua Verde, Los Nidos, Pardito, San Francisco Punta Norte and Salvatierra. Except for the last, the other six reefs are located around the reefs that are within the Fish Refuges.

Having more biomass of top predators and carnivores is a desirable pattern for the recovery of the productivity and function of a reef. For reefs where herbivores and zooplanktivores are more abundant, it is necessary to continue to monitor and evaluate the effectiveness of management tools and make adjustments if changes are not seen in the biomass of these two indicators. Evaluation and close monitoring is of great importance because it allows us to have an idea of the effectiveness of different strategies and tools for management and conservation of natural resources. This knowledge can be useful for replicating and encouraging the use of such strategies on other rocky reefs, not only the Gulf of California, but in other parts of Mexico.

We thank the Proyecto Fauna Arrecifal from the Universidad Autónoma de Baja California Sur, Sociedad de Historia Natural Niparajá A.C., and the fishing communities for their support during fieldwork.