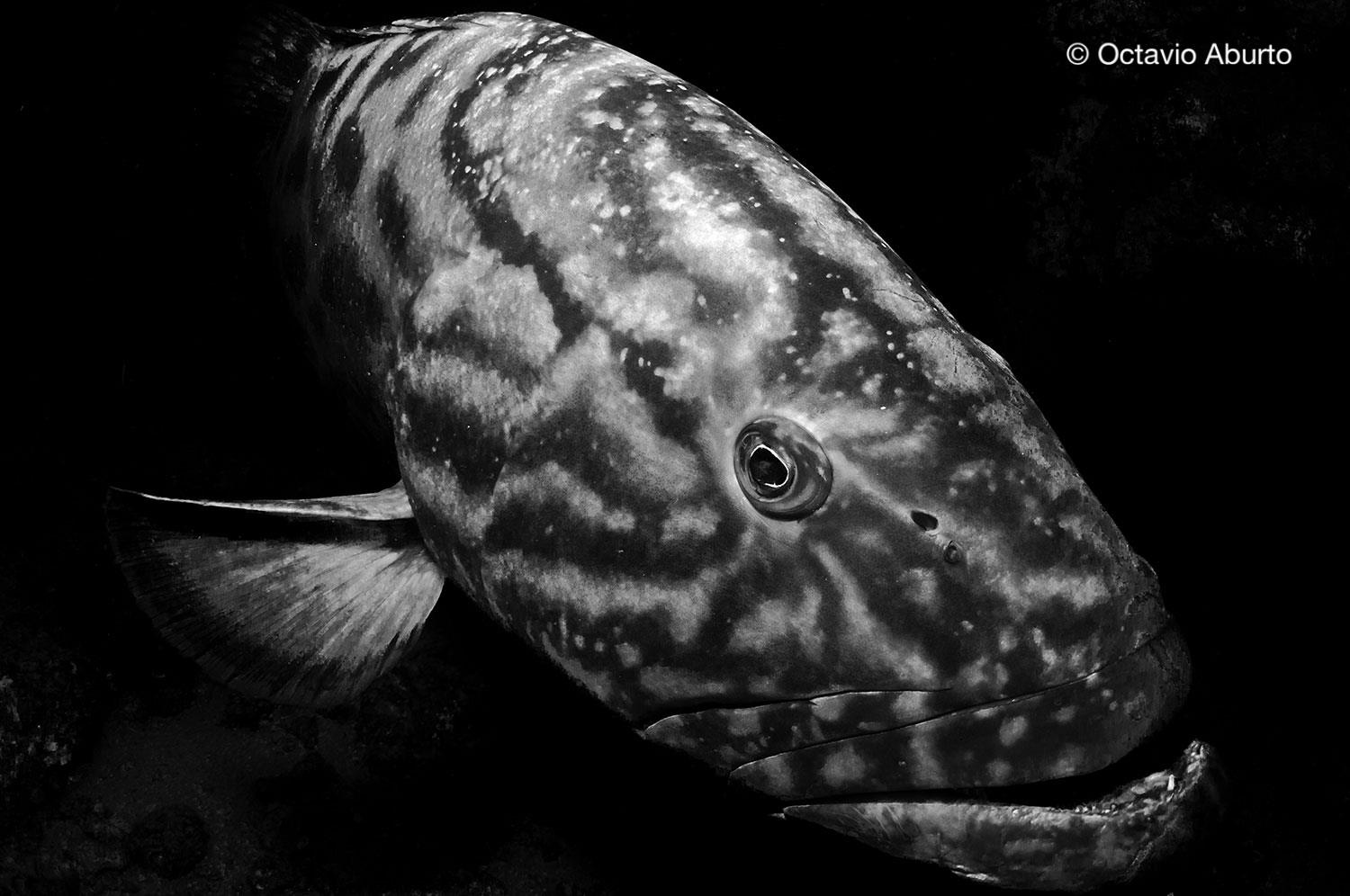 The Gulf Grouper (Mycteroperca jordani) is a top predator endemic to the Gulf of California, México. Historically, it was the most abundant predatory fish species in rocky-reef ecosystems in terms of biomass. Between 1959 and 1960, Gulf Grouper accounted for 45% of finfish landings in the area [1]. Currently, the species only constitutes 1% of the total catches with landings mostly comprised of juveniles as a result of reductions in the adult population size and fishing of spawning aggregations [2]. An estimated 99% reduction in population size since the 1940s has affected the trophic balance of reef ecosystems and local economies. Gulf Grouper is currently listed as Endangered on the IUCN Red List due to the overfishing of spawning aggregations and a lack of knowledge of the life history of this species [3]. Basic information that is essential for restoring and managing Gulf Grouper, such as habitat use, movement patterns, and reproductive requirements, still remains largely unknown. 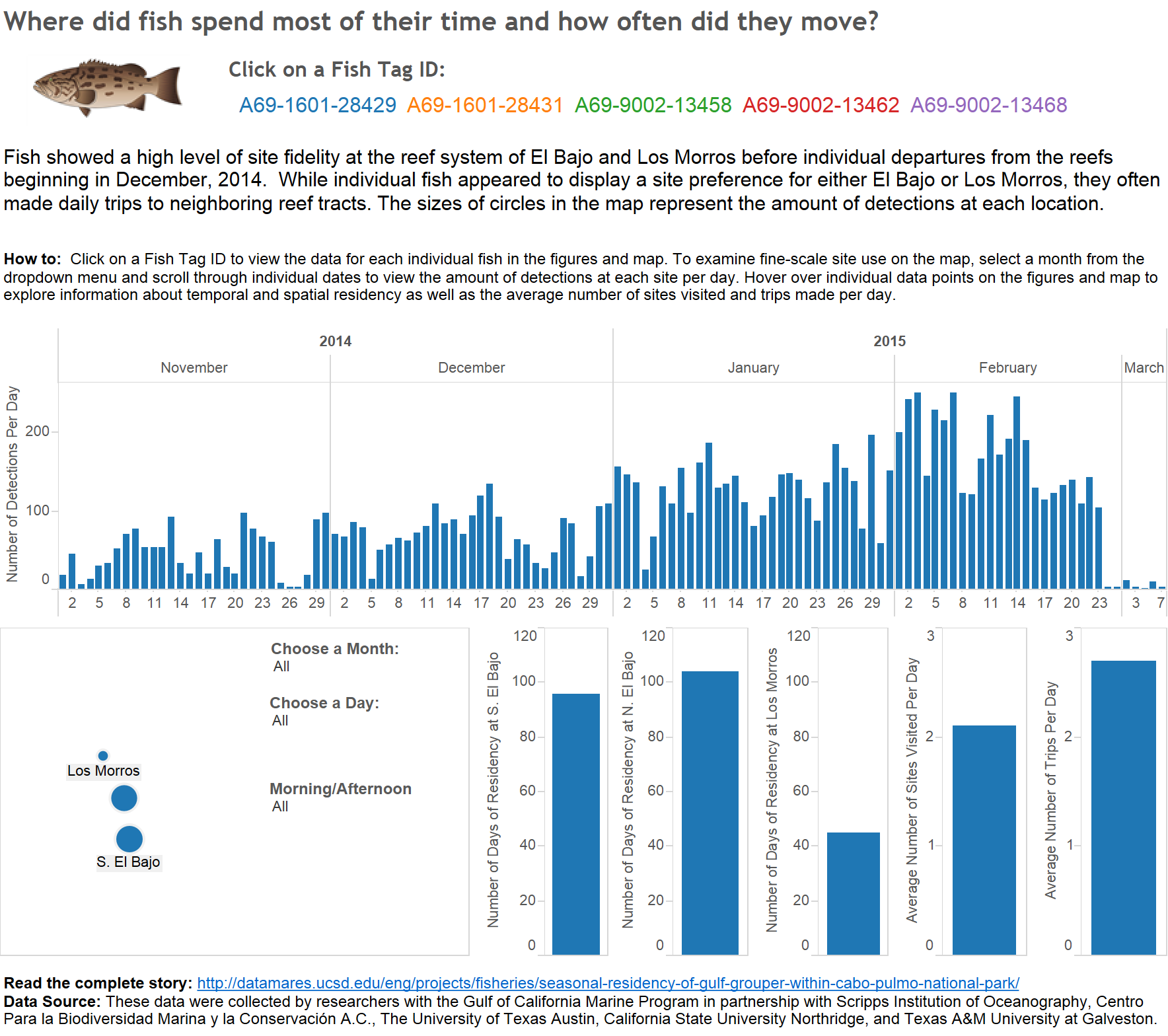 Today, Cabo Pulmo National Park (CPNP) is one of the few locations where Gulf Grouper can be consistently observed, functioning as a refuge and frontline for the conservation and restoration of this species. Since its establishment in 1995, CPNP has experienced greater than an 11 fold increase in top predators [4] and supported the return of Gulf Grouper [5]. While this charismatic species is often seen by visitors to the Park, the level of protection the Park offers has yet to be documented.

How and why do we monitor movement and site use?
Starting in November 2014, the movement patterns and locations of five individual Gulf Grouper were monitored through the use of acoustic tags and 14 acoustic receivers positioned around CPNP. When a tagged fish was within range of a receiver, its presence was recorded, enabling us to determine patterns of movement and residency. By examining movement patterns and site use, we can determine if Gulf Grouper within CPNP are year-round residents with strong site fidelity or seasonal visitors with a high level of mobility. With such knowledge, it is possible to assess the level of protection CPNP provides for this recovering species.

Major Findings:
Fish detections from 1 November 2014 until 6 March 2015 indicate that all five fish exhibited prolonged residency along the El Bajo-Los Morros reef system over the course of one to four months. During these periods of residency, fish were not stationary and traveled north and south along the reefs up to three times per day. Tagged Gulf Grouper began to depart the reefs in December, and by mid-January, four of the five fish had vacated the sites. Presently, it is unknown where tagged individuals went after leaving El Bajo and Los Morros. Individuals may have migrated out of the Park or to deeper reefs within CPNP where acoustic receivers were not located. Whether Gulf Grouper permanently reside within the protective boundaries of CPNP remains to be answered, but from the limited data currently available, the Park at the very least offers seasonal protection for this recovering species.

We are grateful for the project support of CPNP Director Carlos Ramón Godinez Reyes, la Comisión Nacional de Áreas Naturales Protegidas (CONANP), the community of Cabo Pulmo, and the ever helpful knowledge and assistance of Cabo Pulmo Divers.

[1] Sáenz-Arroyo A, Roberts CM, Torre J, Cariño-Olivera (2005) Using fishers’ anecdotes, naturalists’ observations and grey literature to reassess marine species at risk: the case of the Gulf Grouper in the Gulf of California, Mexico. Fish and Fisheries 6:121:133