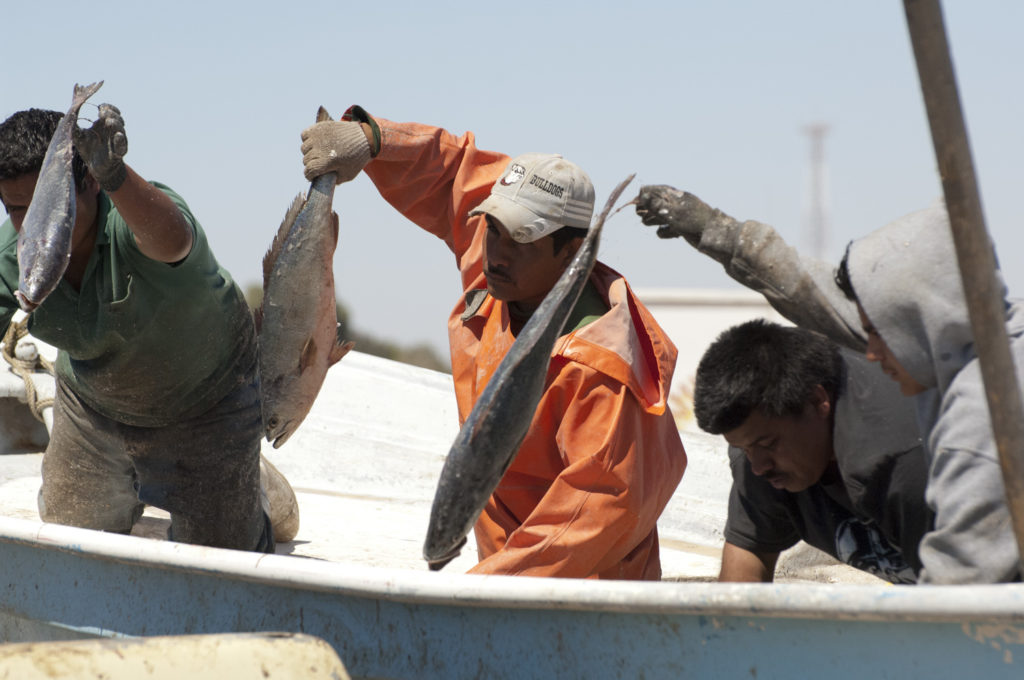 In the Upper Gulf of California, the Gulf corvina (Cynoscion othonopterus) fishery is one of the most important due to its catch volumes (between 2,000 and 6,000 tons per year) and economic gains ($ USD 3 million / year) (1). The Gulf corvina, from the Sciaenidae family, is a fish endemic to this region that migrates to the Colorado River Delta, where it forms spawning aggregations, from late February to August. Spawning peaks are in March and April and artisanal fleets from El Golfo de Santa Clara (GSC), Sonora, Bajo Río, Cucapá, and San Felipe in Baja California target this species (1).

The first catch record was made in 1987 for just 100 kg and just 15 years later, in 2002, an historic maximum catch of 5,942 tonnes was recorded. To ensure the health of the population of Gulf corvina and a sustainable use of this resource, in 2005 a regulation named NOM-063-PESC-2005 (2) was published. This regulation established specific management measures, including: minimum catch size, mesh size of 5 ¾ inches, annual catch quota, hours of operation, closed season, etc. In 2011, the Corvina Technical Group (CTG) was formed to generate, promote, share, and disseminate technical and scientific knowledge about the fishery in order to improve management decisions.

CTG scientists monitor the fishery each year, collecting biological and fisheries data, such as lengths and weights of individuals, sex ratio, reproductive status, total fish weight, age, growth, fish catches, prices of bladder and meat, among others. Currently, the CTG has a database with information from GSC (1993-2015), San Felipe (2012-2015) and El Zanjón (2010). There are five basic biological indicators (3, 2, 4) to help evaluate what is happening in the fishery:

Before 2005, 96.5% of corvina fish landings in GSC were composed of mature fish (> 30 cm). By switching to the 5¾ inch mesh in 2005, this percentage rose to 99.9%, allowing a greater number of small fish to escape from nets. In San Felipe and El Zanjón there are no records of immature organisms (<30 cm) in the landings.

Since the NOM-063 was established, more than 80% of the organisms captured in GSC are above the minimum legal size (65 cm) and within the range of optimal size (64-78 cm). In San Felipe about 40% of mature fish caught are below the minimum size, probably due to the use of gillnets with a four inch mesh size (instead of 5¾). In El Zanjón, more than 95% of the fish caught are larger than 65 cm. GSC and El Zanjón fleets catch fish that have reproduced more than twice, while in San Felipe, nearly half of the catch have reproduced once or twice.

The proportion of mega-spawners in landings from El Zanjón (0.8%) and GSC (2.5%) was low, and there are no records of fish larger than 78 cm in total length in San Felipe. This may be due to high fishing intensity directed to the portion of the population between ages five and seven years (64-78 cm), resulting in low survival of long-lived organisms.

GSC and San Felipe fish catches show that 24% and 51.5%, respectively, consists of male individuals, whereas in El Zanjón, 54% were male. The even distribution between males and females may indicate that there is no gender segregation in spawning aggregations and fishing gear does not target a specific gender. This has important biological implications for the species since capturing adult organisms of both sexes reduces the amount of fish that contribute new organisms to the population.

All of the above, coupled with the fact that 75% of Gulf corvina are caught during the species spawning aggregations makes the corvina highly vulnerable to overexploitation (1). For this reason, analysis based on the size structure, biological-fisheries monitoring, implementation of NOM-063, and the rest of the legal legal framework in the region (such as enforcing the no-take zone) benefit the sustainable management of the Gulf corvina fishery in the Upper Gulf of California.

The organizations that participate in the Corvina Technical Group (CTG) are: