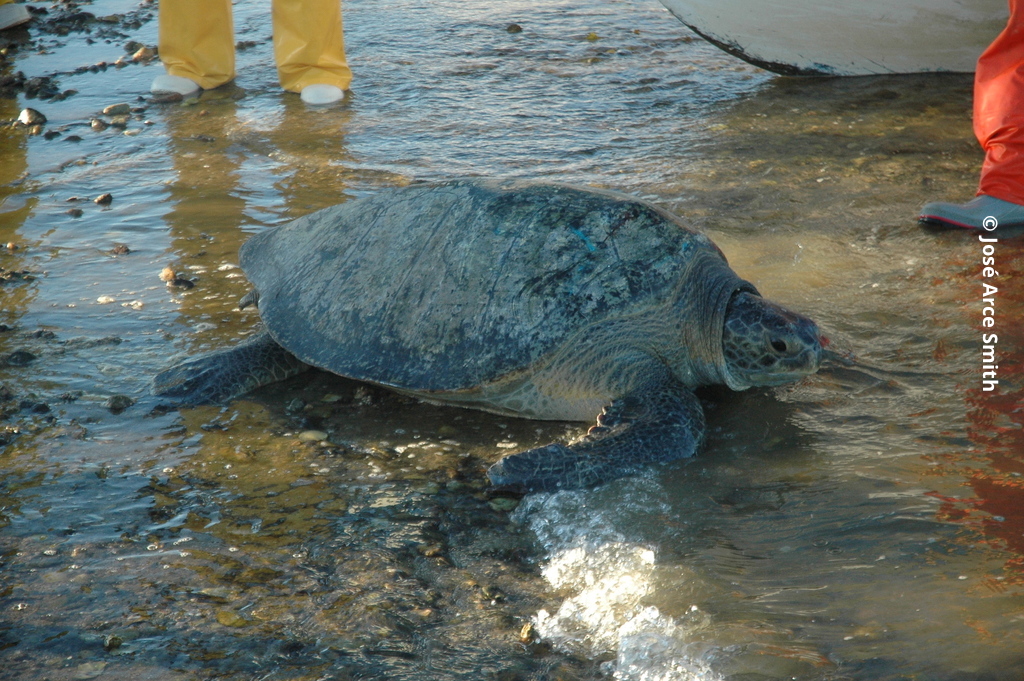 Green sea turtles (Chelonia mydas) have been a source of food and medicine for the inhabitants of the Baja California peninsula for at least 12,000 years, and in the late 20th century were fished to near extinction. Although green sea turtles were captured for centuries, scientific monitoring in this region began in the early 2000’s, and available baseline data corresponds to very low population levels. To understand population levels and set recovery targets, we must first understand the long-term human impacts on this green sea turtle population segment.

By combining multiple data sources, we reconstructed green sea turtle captures over three centuries at two key feeding grounds in the Baja California peninsula. Using ethnography, we worked closely with expert fishers to understand the close relationship between humans and sea turtles in the region. We pored over historical documents such as whaling logs and mission records, and used archaeological data to reconstruct human impacts across time. Although official green sea turtle capture data was available for only 7% of the chronology, this process allowed us to quantify green sea turtle captures nearly 300 years into the past, and revealed encouraging signs for this once heavily exploited sea turtle population.

In this region, human impacts on green turtles can be divided into roughly three periods: small-scale fisheries, large-scale fisheries, and conservation. Small-scale sea turtle fisheries operated for thousands of years, from the earliest phases of human occupation in the region. Small human populations and relative isolation meant that both artisanal and commercial sea turtle fisheries in Baja California remained relatively small and sustainable. Large-scale fisheries occurred during the second half of the twentieth century. Urban growth along the Mexico-U.S. border led to a market for sea turtle meat, while nets and motors increased fishing efficiency and roads increased market access. Green sea turtle captures grew ten-fold compared to previous centuries and led to collapse in less than 20 years. Significant conservation efforts began in the early 1980’s, and a total ban on sea turtle captures in Mexico was declared in 1990. These efforts have led to increased catches during scientific monitoring efforts in recent years.

In Baja California, humans and sea turtles have sustained a unique relationship over thousands of years. Unlike other parts of the world, overexploitation of green sea turtles was a relatively recent event in Baja California, and older fishers still observed sea turtle abundance before large-scale human impacts occurred. This makes the region a “time capsule” that provides clues about past marine ecosystems. This information from the past can help us see towards the future, setting informed conservation goals.

Good management and conservation practices generate positive results. East Pacific green sea turtle populations are increasing in feeding areas and at nesting beaches, and current research suggests this trend will continue. Further research is needed compare the past and present populations of these complex organisms, and there is still much work to be done before populations recover their historical abundance levels. However, there is reason for optimism.

We thank the communities of Bahía de los Ángeles and Guerrero Negro for their trust and partnership. We are very grateful to Grupo Tortuguero de las Californias A.C., Reserva de la Biósfera El Vizcaíno, Área Natural Protegida de Flora y Fauna Isla del Golfo, Exportadora de Sal S.A., and C. Delgado-Trejo for logistical support and for kindly providing monitoring data. While carrying out this work (2012-2014), M.M.E.C. received an academic grant from the Mexican National Council for Science and Technology-CONACYT for her studies in the Graduate Program in Ocean Sciences and Limnology at the National Autonomous University of Mexico (PCMyL-UNAM). This Field research was partially primarily funded by grant 2012-383 from the Walton Family Foundation to Grupo Tortuguero de las Californias. This story is based on a peer-reviewed paper published in Fish and Fisheries (Early-Capistrán et al., 2018. https://doi.org/10.1111/faf.12236).