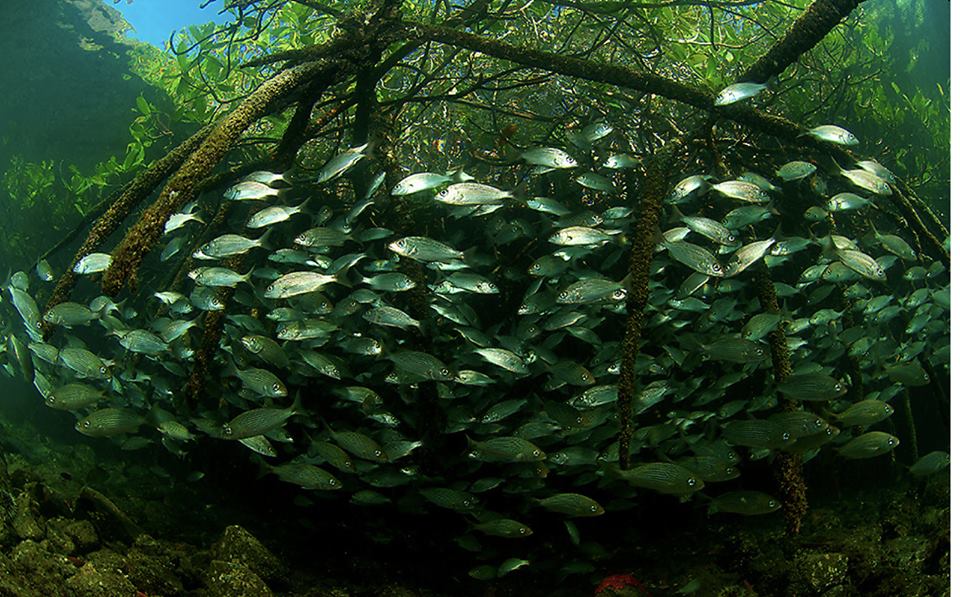 Mangrove forests form complex and productive ecosystems at the edges of the tropical oceans, and provide key habitat for numerous animal species.  Home to terrestrial mammals and reptiles, flocks of migrating or resident birds, and schools of fishes that use the flooded mangrove forest floor as nurseries and feeding grounds, mangroves are teeming with life.1  Some fish, such as the commercially important yellow snapper (depend on estuarine habitats as nurseries in their first year of life.2  These and many other small and juvenile fishes find food and protection from predators among the tangle of red mangrove (Rhizophora mangle) roots at the edge of the forest.  This fringe habitat can be a highly productive nursery.3 For example, each hectare of mangrove fringe adds $37,500 per year to the Gulf of California’s yellow snapper fishery.4 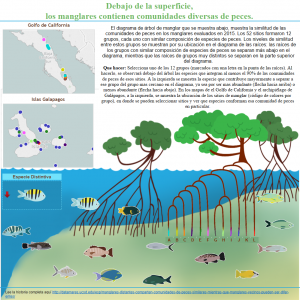 In 2015, we quantified the habitat role of mangroves in the mangroves of the eastern Pacific.  Not only did we survey fish community compositions at sites in both the southern and central Gulf of California, Mexico, but we also conducted parallel surveys in mangroves of the Galapagos Archipelago, Ecuador.  In both places, mangroves provide habitat to communities of fishes, with many overlapping species.  However, the Galapagos’ mangroves are set apart from those of the Gulf of California by a more tropical distribution of species and exposure to different oceanic currents and climate.  In addition, the Galapagos as a whole represents a much less human-impacted natural system than the Gulf of California, with overfishing exerting less of an impact on coastal fish communities.  Our goal was to explore the variation in mangrove fringe fish communities both locally (from one island or area to another) and between the Gulf of California and the Galapagos Islands.  At each site, we performed visual surveys while snorkeling underwater transects (50 m long × 2 m wide) along the mangrove fringe, recording the species and abundance of all fishes observed.

Based on fish community composition (the diversity of species and abundance of fish belonging to each of those species), we found that the 52 sites can be divided into 12 groups.  Within a group, all the sites possess roughly the same community of fish, whereas the communities found at sites in different groups are distinct.  Some of these 12 communities are not very dissimilar from each other, whereas a few are quite unique.  The tree diagram helps us see these relationships among the groups.  Each group has its own color on the map and is denoted by a letter (A – L) at the bottom of the tree diagram.  The roots of the mangrove tree split as they reach into the water, and each distinct group of sites corresponds with a root tip.  Groups with similar fish communities split low on the diagram, while groups with very different communities separate closer to the top of the roots.

For instance, notice that groups G, H, and I branch together on the diagram.  These communities have more in common with each other than with any of the others in the study.  You can see on the map that they are also in similar areas of the same island in the Galapagos.  Group L is separated by all the other sites in the first split at the top of the root diagram; its community is the most distinct from the all others.  Notice, though, that the one site that comprises this group is located close to many sites with very different communities.  Large differences in fish communities can therefore be seen in mangrove forests only a few kilometers apart.  However, other groups, such as group J, show that there can be similarities among sites that are far apart.

Many species are shared between the mangroves of the Gulf of California and those of the Galapagos, but in general sites in the same region tend to share similar communities. However, interesting exceptions can occur.  San Lucas, in the Central Gulf of California, and Urbina II, on Isabella Island in the Galapagos, have similar fish communities (Group F) although they are separated geographically by thousands of kilometers. And, though the sites of group K are located close to other sites in the Gulf of California, they share a unique community very different from those of any other groups of sites.

The diversity of communities, even on relatively small geographic scales, in the Galapagos and the Gulf of California highlight how much we still have to learn about the ecological processes generating these patterns in fish species distributions.  Thus, the study of these communities presents an opportunity for research aimed to understand the way populations are structured across natural environments.  Also, in light of this local diversity, conservation and management decision-makers should include a broad set of habitats within protected areas.  Our results show that protecting just one area could miss important components of mangrove fish community diversity.