How does Mexico invest in its fishing industry?.

The subsidies are economic supports that have been granted to public entities to help generate greater profits or incentives for certain activities (1). It is estimated that in 2009 about 35 million dollars were allocated in fisheries subsidies throughout the world. 22% (almost 8 million dollars) went to buy fuel, monitor programs for fisheries management (20%, ~ 7 billion dollars), and build ports and docks (10%, almost 4 million dollars) (2).

In Mexico, CONAPESCA implemented subsidy programs to increase profits and improve the quality of life of the fishing sector (3). The programs that more funds channel in the sector of marine fuel and modernization of vessels (4). The subsidies are not necessarily “bad”, but it is necessary to have clarity about the impact that is sought when applying them. They should allow the producer to operate in adverse circumstances or disadvantage, but they should not create a dependency on them. In general, the types of subsidies are classified as beneficial, ambiguous and harmful (5). 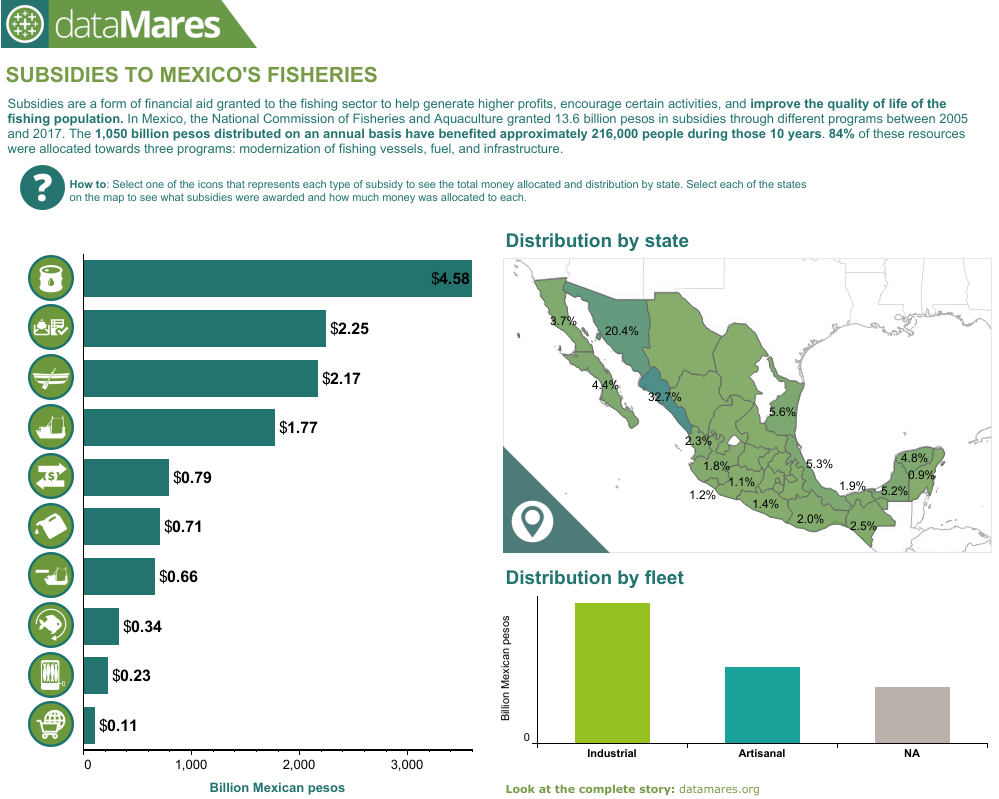 In what programs has CONAPESCA invested the budget assigned to it? How are subsidies distributed between states and fleets? To answer these questions, we analyzed 10 subsidy programs delivered from 2005 to 2017 *.

* Not all subsidies are delivered annually.

About 13.6 billion Mexican pesos were invested in different subsidy programs between 2005-2017 throughout the country, with an annual average of around 1 billion pesos, and approximately 216,000 beneficiaries during those 12 years.

The fuel subsidy program was granted the most amount of money, with 38.85% of the total amount ($ 5,300 million pesos); followed by vessel improvement (modernization) with 29% ($ 3,950 million pesos); and the third largest amount for works (infrastructure) and studies with 16.5% ($ 2,252 million pesos). These three groups account for 84.3% of the public funds that CONAPESCA allocated to the fishing sector.

In contrast, CONAPESCA invested only 7.3% ($ 1,000 million pesos) in programs that promote the sustainable use of resources (6): reduction in fishing effort ($ 646.3 million pesos) and fishing regulations ($ 337.4 million pesos). This unbalanced distribution is worrisome if we consider that 47% of the fisheries in Mexico are at capacity, 28.6% are overexploited and the remaining 18.3% are collapsed (7).

Among the types of fleets there is also an imbalance in the amount of funds assigned to them (4, 8). Of the total subsidies granted, under all programs ($ 13.6 billion pesos) in 2005-2017, funds for the purchase of diesel fuel (industrial fleets) represented 33.6% , while gasoline comprised only 5.23% (small-scale fishing fleet). When analyzing just the fuel program, about 87% of the resources are for diesel and the rest to gasoline. If we add to this the resources granted for vessel improvement, the second largest program in terms of money, the industrial fleet accounts for 46.6% of the subsidies compared to 21.2% for the artisanal fleet.

This imbalance in the distribution is also observed geographically. Of the $ 13.6 billion pesos, $ 13.2 billion were granted to beneficiaries in the 17 coastal states, where Sonora and Sinaloa consistently receive the largest amounts for subsidies. The states that were mostly benefited were: Sinaloa (33.7%), Sonora (21%), Tamaulipas (5.8%), Veracruz (5.5%) and Campeche (5.3%).

CONAPESCA seems to prioritize subsidies that facilitate the work of fishing fleets, overcapitalizes fisheries and saturates markets. In the medium and long term, this can result in a decrease in individual earnings, because there are fewer and fewer resources that have to be divided among more people, while the costs of fishing continue to increase. The government continues granting subsidies so that fishers spend more time in the water trying to fish the same volumes, creating a dependence on subsidies.

The distribution of subsidies must be analyzed for their impact. Better distribution could have a greater impact on fishing communities and organizations. Artisanal fishing generates more jobs, greater economic value (8) and produces almost the same volume of food for direct human consumption as industrial fishing (7). The artisanal sector would benefit from support for the purchase of maritime safety equipment, for infrastructure that allows adding value to their products, and even both fleets would benefit from support for surveillance programs.

The way fishery subsidies are used must be rethought, eliminating “bad” subsidies, to redirect those funds to programs that support sustainable activities (2). The fishing sector in Mexico needs investments that help it increase its competitiveness and allow it to satisfy the country’s food requirements. Eliminating programs that increase fishing effort, without specific measures or limits for fisheries, not only affects the health of fish stocks, but also places the future of fishing in Mexico at risk.