How many species and groups of invertebrates are in the Gulf of California reefs? 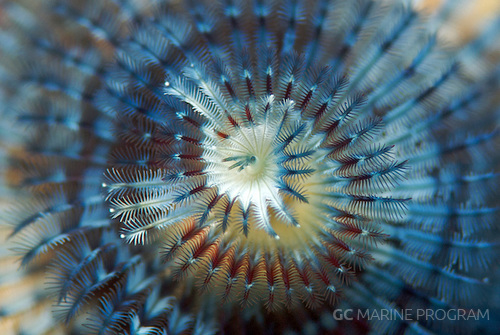 The fish communities in the reefs of the Gulf of California (GoC) have been studied extensively (1, 2), however, there is little research on species of invertebrates. The lack of information about this community limits the management and protection of reefs in the GoC (3). How many invertebrate species are in the rocky reefs of the GoC? What are the most frequent and abundant (dominant) groups?

We analyzed data on invertebrates from 2006 to 2013 from the Gulf of California Marine Program’s ongoing Ecological Monitoring, which surveyed 186 rocky reefs covering the northern GoC, all the way to the Revillagigedo Archipelago (4). The Program recorded 185 invertebrate species belonging to 14 groups: sponges, sea pens, hard corals, sea fans, flat worms, sea worms, starfish, sea urchins, sea cucumbers, snails, clams, sea spiders, crabs, and ascidia. Based on the frequency and the number of individuals or colonies in each group, they were placed into four categories: dominant, common, occasional, and rare. To present the results, we use six regions: north, center and south of the GoC, Islas Marias, Bahía Banderas, and Revillagigedo Islands (5).

Of the 14 groups of invertebrates found, five were dominant: sea fans, sea urchins, hard corals, sea pens, and ascidia. The number of species from these groups was greater in the northern and central Gulf (106-129 species), decreasing towards the south (49 in Bahia de Banderas and Revillagigedo). The northern region of the GoC is populated mostly by sea fans, sea urchins, hard corals, and ascidia, which prosper in the rocky habitats of the different islands and their cold waters (14-23°C), rich in food. In the central Gulf, sea pens and starfish start to appear among dominant groups and, together with the invertebrates from the north and south, the number of species climbs to 129. In this region, although there is less availability of rocky habitat, the transition between the cold waters of the north and the tropical waters of the south, as well as the deep waters, rich in nutrients, rising from the ocean floor, help maintain a great variety of species.

The south of the GoC is the region with the least variety of species (82), and only two dominant groups are found (sea fans and hard corals). In this region, there is almost no rocky habitat and the warm water (23-30°C) offers little food. Islas Marias harbor 62 tropical species, which include many sea fans that resist the strong waves and swell. In Bahia Banderas, there are few tropical species (49) and we found extensive sea fan forests resistant to strong waves that feed from the nutrients provided by the ocean swell. The 49 species monitored in Islas Revillagigedo, where there is little food and strong waves, are tropical oceanic species dominated by hard corals and sea urchins.