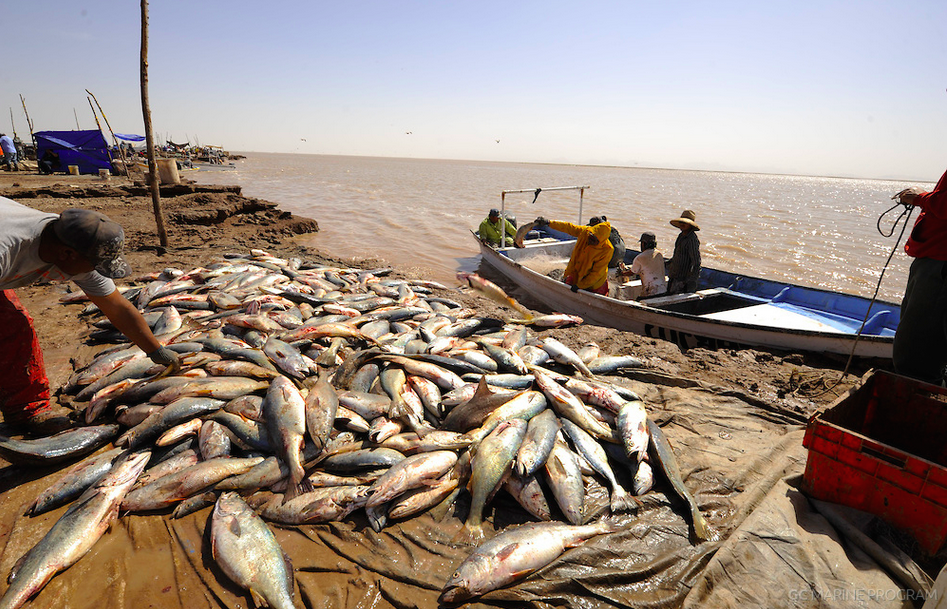 During the months of March through June, over a million Gulf Corvina (Cynoscion othonopterus) migrate to the Colorado River Delta in the Upper Gulf of California to amass a large spawning aggregation of great ecological and commercial importance (Erisman et al. 2012). The aggregation is present in this turbid shallow water environment over the course of a few days prior to the new and full moons in each month. The absence of individuals between spawning events indicates that adults make long distance migrations to and from the site. During these brief spawning periods, the aggregation is the focus of a large fishery that supports the communities of El Zanjón, El Golfo de Santa Clara, and San Felipe with landings of up to 5900 tons of Gulf Corvina caught over the 25 days of fishing each year (Erisman et al. 2012).

When aggregated, male Gulf Corvina actively produce croaking sounds that are associated with courtship behaviors. The additive effect of chorusing by thousands of male fish in a given area allows these underwater sounds to emanate into the air. Fishermen know through their experiences that if they can hear Gulf Corvina croaking from their pangas, there is a greater chance of high catches. The successes of this adaptive fishing strategy indicate that the louder an area is, the more fish are present. Therefore, measurements of fish sound production may be used to determine the spatial distribution of the aggregation and fish abundances across the Colorado River Delta spawning grounds, providing important information for future management plans.

In late March 2014, researchers from the Gulf of California Marine Program teamed up with fishermen in El Golfo de Santa Clara to record sound production by aggregated Gulf Corvina. Surveys were conducted across the delta during incoming and outgoing tides. At each location a hydrophone (an underwater microphone) was lowered into the water and ambient sound was recorded. Sound levels were measured for each location to determine the spatial dimensions of the aggregation and changes in sound levels (i.e. fish abundance) across the study area.

Sound measurements indicated that the aggregation measured over 10 km in length over the survey area. Observations of louder sound recordings revealed regions that contained more fish and reproductive behaviors. Differences in the spatial distribution of sound levels recorded during incoming and outgoing tides may be representative of fish movements with tidal flow or temporal patterns in sound production and spawning. Overall, sound levels were highest on the outgoing tide, indicating that spawning activities likely peaked during this period.

In areas of the channel where sound levels were attributed to the presence of aggregating Gulf Corvina, recordings were up to 32 dB (decibels re: 1μPa) louder than the lowest noise levels, as measured in the extremities of the survey area. Since a 3 dB increase in sound corresponds to a doubling of “loudness,” the spawning aggregation creates an environment that is over 10 times louder than areas without large amounts of fish, and importantly, these levels were continuous over large areas. As already proven by the successes of fishermen, the best way to find, map, and monitor the aggregation of Gulf Corvina could well be through passive listening of the sounds produced by spawning fish.

We are grateful for the help of Angel Montes, Jesús Cabrera Rivera, Josué Montañez Rivera, Emiliano Cabrera Rivera, Yazmín Flores, Catalina López-Sagástegui, and Octavio Aburto-Oropeza for their efforts in helping with project logistics.