Overview of the fishing sector in Mexico: Part II. 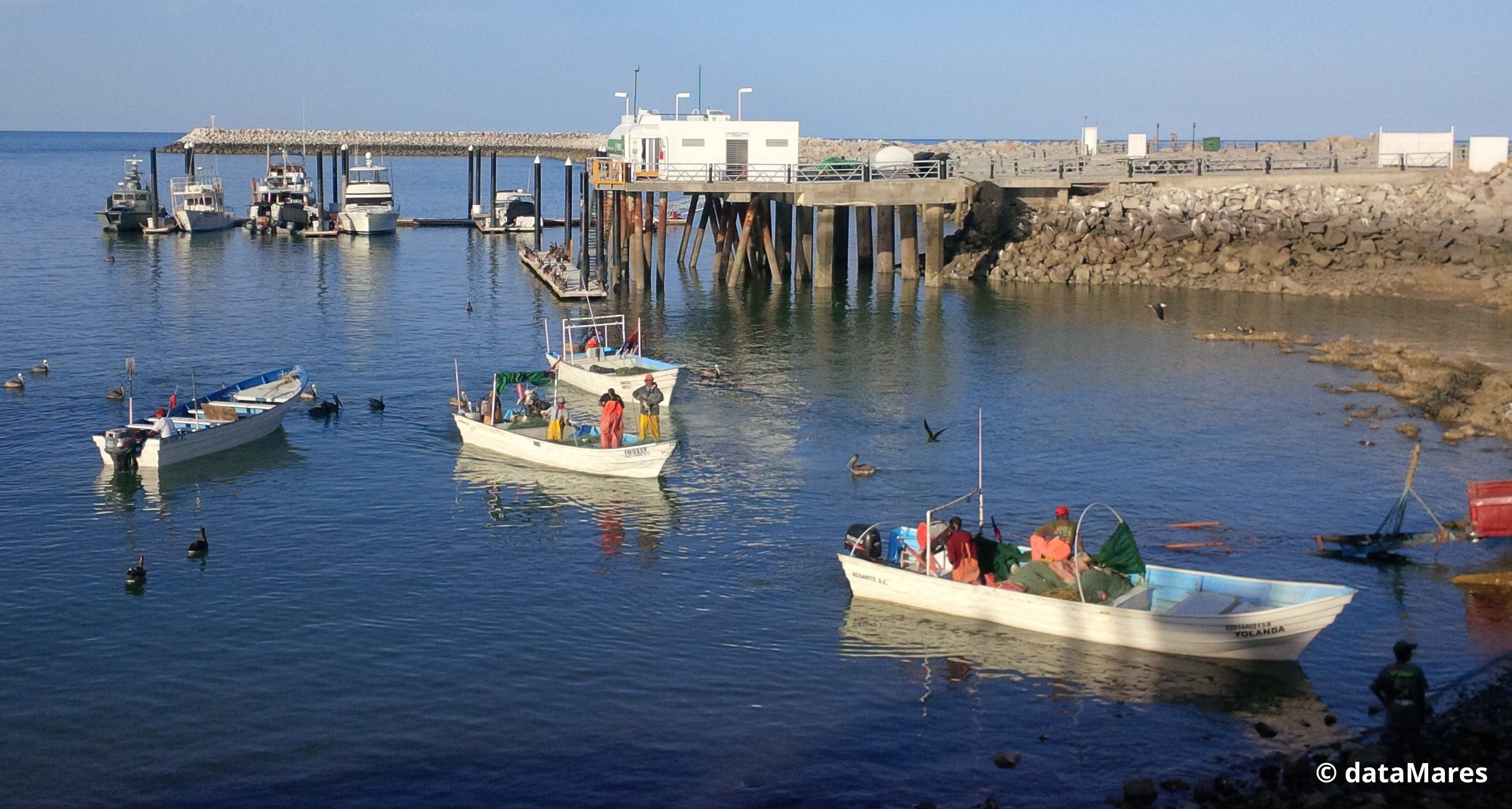 In each vessel that sails from Puerto San Carlos, Baja California Sur and 16 other coastal states of Mexico, sail the dreams of its crew. Alexis Torres, 27, is an independent fisherman who goes out in his panga, a type of artisanal boat, to fish with nets or by diving (1). A few blocks away, lives 55 year-old Julio Lopez , who recently was able to purchase a used boat, which he sails with his friend Jaime to fish shrimp, crab or other target species (2). Like Alexis, they are artisanal fishermen.

Towards the north in Puerto Peñasco, Sonora, Víctor Montaño, 53 years old, and Miguel Ángel Cantú, 55 years old, sail in high-seas fishing ships (3), similar to the sardine fishing vessels found in the port of Guaymas (4). These larger vessels carry out what is called industrial fishing.

These two types of fleets is how fishing is carried out in the country. The industrial fleets have boats with a storage capacity of more than 10 tons and autonomy at sea of more than 10 days, while artisanal boats have a storage capacity of no more than 3 tons and autonomy of 2 to 3 days at sea. The first uses fishing gear with different adaptations to capture larger volumes (2 types of gear), while the second is diversified into nets, diving equipment, traps, and hand lines with hook (total of 18 types) (5). Both fleets carry out an important economic activity for the country with different economic and productive impacts. We will analyze this impact based on data from the National Commission of Aquaculture and Fisheries (Conapesca) for the period 2006-2014 (6).

Both fleets covered the 11,500 kilometers of coastline in the country every day and extracted over 1.2 million tons of marine product annually, generating 11 billion pesos in economic value.

The most notorious difference between the two fleets is that the artisanal fleet targets more species than the industrial fleet, approximately 665 species, grouped into 52 groups, while the latter targets 48 species, grouped into 9 groups. In other words, artisanal fisheries target almost 14 times more the number of species than the industrial fisheries and generates 2.5 times more economic value.

The industrial fleet captured 818,000 tons on average annually during the same period. For this fleet, only 3 groups of species represent 90% of the total landings, in which the sardine accounted for 65%, followed by tuna with 14% and anchovy with 12%. These products generated an average of just over 3 billion pesos per year.

Within the group of species targeted by the artisanal fleet, 23 species comprise 90% of the total catch volume, according to the data from Conapesca. Between 2006 and 2014, this fleet caught almost 445,000 tons of fish and shellfish a year on average and the species that contribute the most are grouped under the category  “others” with 17%, squid with 11%, shrimp 8%, crab 6%, octopus 6% and clam 5%. The total economic value generated by these catches was almost 8 billion pesos per year.

It should be noted that the group “others” corresponds to a group of species which Conapesca has not disaggregated or provided detailed information on for the period in question. It is a group, however, that represents on average 71 tons in landings and generates 650 million pesos per year and whose relevance we will explain in future stories.

Although it does not have the technological development and autonomy of the industrial fleet, the artisanal fleet has the possibility of directing its effort towards different fisheries. The variety of species that are targeted is due to the larger number of ecosystems in which this fleet can carry out its activity.

Read part one of this series here.

This work is part of a scientific journalism project launched by dataMares, which aims to achieve greater transparency, dissemination, and understanding of key information for decision-making regarding the sustainable use and conservation of natural capital. The close collaboration between journalists and scientists from different groups, especially the Gulf of California Marine Program (GCMP), is a central element of this project, the first with of its kind in the country.