Productivity and recovery of rocky reefs in the Gulf of California 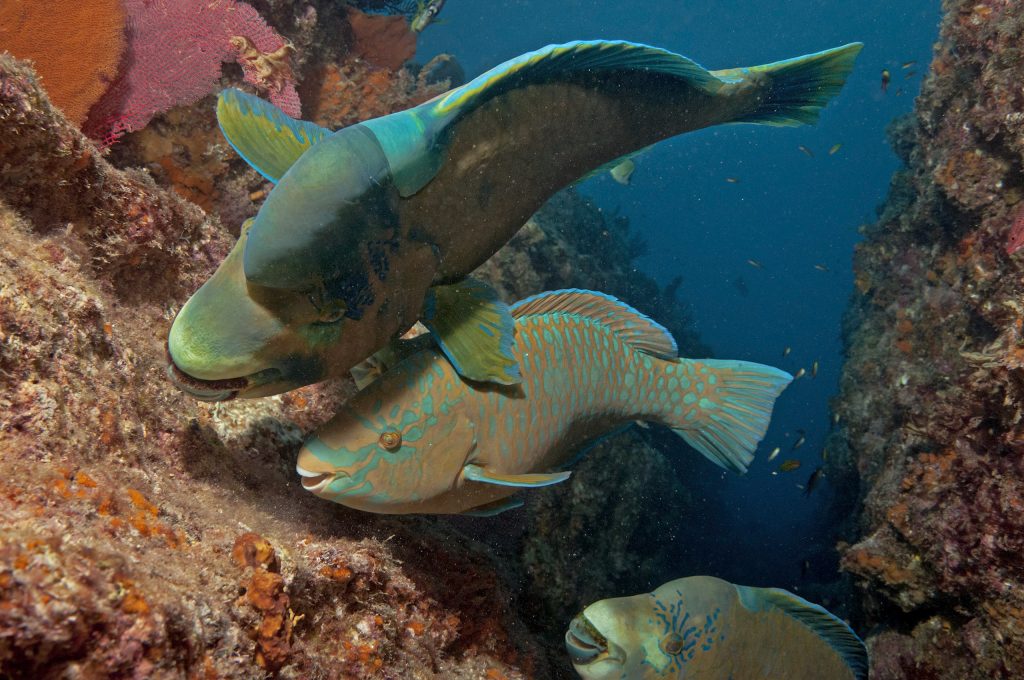 Globally, the deterioration of reefs has been greatly increased by overexploitation of fish stocks (1). When fish populations decline, the health and function of reefs deteriorates (2). For example, in the absence of herbivores that feed on algae, the algae proliferates and covers the corals, causing their death and changes in fish populations, in productivity and an uptake of calcium carbonate (3).

In the Gulf of California there are few studies that determine the fishery productivity of reef systems. Here we present a case study focused on four species of great ecological and commercial importance, more frequent and abundant in the rocky reefs of the region: parrotfish (Scarus rubroviolaceus, Scarus ghobban, Scarus perrico and Scarus compressus) belong to the Scaridae family and their diet is based mainly on algae (herbivores). Its main ecological function is to control the growth of algae that compete for the same space as corals. They are important producers and transporters of sediment and intervene in the recruitment of new coral colonies by cleaning the area where the new coral will settle.

Parrotfish are an important resource for small-scale fishers. Its soft, white flesh is considered top quality and can be sold at a high price. Due to its high demand in local markets, the populations of this group have decreased in the last 20 years. However, it is possible to recover their populations and their function in rocky reefs.

We use ecological monitoring data from the Gulf of California Marine Program (2001-2015) to estimate average sizes, abundances and volumes of parrotfish. In addition, we use CONAPESCA catch data (2001-2015), habitat distribution data (4), fishing effort distribution calculations (5), the carrying capacity (K) of the rocky reefs of the Gulf of California and the intrinsic population growth rate (r) of the fish.

In the municipalities of La Paz and Loreto in Baja California Sur, the available area of ​​rocky reef for parrotfish populations is 18,7860 hectares. In the past and in pristine conditions, these reefs had the capacity to hold around 1,678 tons of parrotfish, which in turn would reproduce and yield around 179 tons annually (after considering predation and mortality). However, we estimate that currently there is an available biomass of about 400 tons, which produces only 68 tons per year.

It is necessary to consider several factors to achieve good management of rocky reefs, such as habitat availability, carrying capacity, catch volumes, biological parameters (growth) of species and population, as well as oceanographic parameters. This type of analysis will allow us to improve fishing management strategies that can maintain healthy fishing populations while generating economic benefits for fishermen and allows consumers to enjoy this food.