Understanding the jellyfish bloom of 2012 in Golfo de Santa Clara. 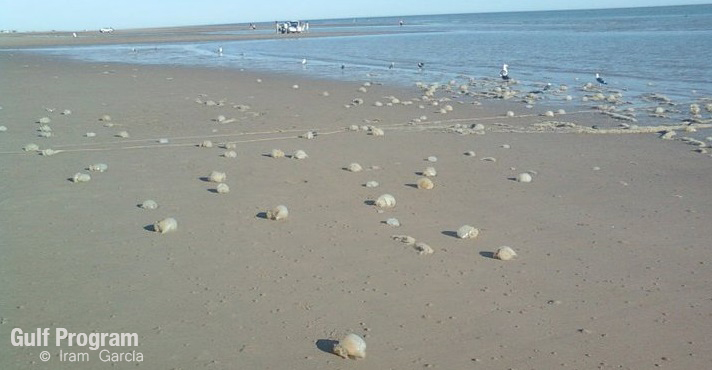 Since the 1970s, concern has emerged about the increase in size and frequency of jellyfish blooms in many regions of the world [1]. Although there is no conclusive evidence that ocean health deterioration is linked to jellyfish blooms [2], scientists believe that these are a consequence of natural global climate oscillations at decadal scales, and some argue that they are only the prelude of the effects that the ecological systems will suffer [3]. However, despite the lack of understanding of the causes of these blooms, in some cases the economic consequences are tangible. Jellyfish fisheries are being developed around the world as a response to a growing market driven mostly by an Asian demand.

The conditions by which these organisms can bloom are diverse, but they are usually associated with high temperatures and coastal pollution, which can enhance food availability by releasing organic matter into the water. Most of the jellyfish have a complex lifecycle, with a phase (strobila) during which it lives attached to the floor, and some phases (ephyra and medusa) where it floats freely. Strobilas require sandy bottoms with low energy currents to develop, such as the coastal lagoons in Guaymas, Sonora. The ephyras and medusas rely on high food availability to grow and strong currents that move and concentrate them in specific areas.

In 2012, a massive bloom of cannonball jellyfish (Stomolophus meleagris) occurred in the upper Gulf of California, in the waters near El Golfo de Santa Clara (GSC), Sonora, Mexico. The local artisanal fleet landed approximately 20 000 t, which generated almost 3.5 million US in revenue in less than 40 days from late May to the first week of July [4]. This provided much-needed income to the community during a time of the year when fish landings are usually low due to low availability of target species [5]. After such a productive season in 2012, the Mexican government promoted fishing programs to develop a jellyfish fishery in GSC, which prompted fishermen to invest millions of dollars in infrastructure and equipment hoping that 2013 would be just as successful and productive. The jellyfish never arrived in 2013 and those investments became losses [6]. Is it responsible to promote fisheries that are based on sporadic and poorly understood bloom events?

Major findings:
The 2012 cannonball jellyfish bloom in GSC was the result of a combination of several oceanographic factors in the Gulf of California. These organisms were born 700 km south of GSC in Guaymas, Sonora, between April and May, when water temperature was between 20-31 °C. During 2012 these jellyfish were exposed to very high food availability (between 4-12 mg/m3 Chla), and a northward persistent current that transported and aggregated them into GSC one month later. This rare bloom event proved to be an economic opportunity for fishermen from GSC. However, it also proved to be a lesson on the impacts of establishing a fishery based on a resource whose availability depends on sporadic massive blooms, especially when the communities in the region rely so heavily on marine resources.

The cannonball jellyfish is a species currently established in coastal lagoons along the Gulf of California’s eastern region. Their northernmost distribution where they are known to completely develop their full life cycle is Guaymas [7]. Every year, when the water temperature is around 21 °C, the little ephyra are released, which is commonly during the last week of March.

We thank all the fishers from El Golfo de Santa Clara who collected data; thank you to Y. Flores, J. Montañez and J. Vazquez for their assistance on the field. This research is part of a larger effort led by the Gulf of California Marine Program at the Scripps Institution of Oceanography to implement citizen science projects in the region. We are grateful to the David and Lucile Packard Foundation and the Walton Family Foundation.