Assessing the role of fish in kelp forests and rocky reefs.

There is a widespread perception that the healthier an ecosystem is, the more species it will have (1). This way of understanding nature focuses on defining which species are present without explaining their role in the ecosystem. An approach focusing on species’ functions seeks to identify the components of diversity that influence ecosystem performance (2). When we have two communities with the same number of species we could believe that their response to any changes, natural or induced, will be the same. For example, one of these communities could have multiple species that share functional traits like biological (e.g. type of food), morphological (e.g. body shape), and ecological characteristics (e.g. habitat preference). These species may play similar roles in the ecosystem, so they make up a functional group. Therefore, variations in the presence or density of a single species may be compensated by other species of the same functional group. Meanwhile, the second community could have a single species that is responsible for multiple functional groups. In this case, a decline in this species’ population would result in the loss of multiple ecosystem roles. From this perspective, the loss of a single species can have varying effects on ecosystem function, and it becomes clear that maintaining all ecosystem functions is more important than temporary or permanent changes at the species level. 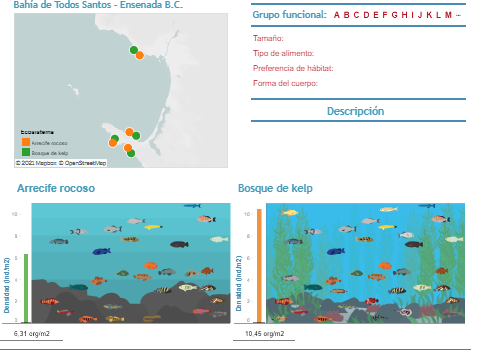 Kelp forests (Macrocystis pyrifera) and rocky reefs are characteristic ecosystems of the Pacific coast of Baja California. Kelp forests are one of the most productive ecosystems, housing a great diversity of fish, while rocky reefs sustain some of the most important fisheries in the region (3). However, the abundance of macroalgae and three dimensional structures that giant kelp generate means greater opportunity for the diversification of ecosystem functions. Meanwhile in the rocky reefs the macroalgae and food network supported by this ecosystem are more limited. At the present, natural and human stressors, as well as selective species exploitation, are increasing, making it important to understand the responses of marine ecosystems at a function level, rather than at species level, and to identify functions that can be vulnerable in future scenarios.

We conducted visual surveys through scuba diving (5) in four kelp forests (Las Rosas, Rincón de Ballenas, La Bufadora and Campo Kennedy) and four rocky reefs (Punta Morro, Rincón de Ballenas, La Bufadora and Zeppelin) during the spring of 2014. We chose functional traits that incorporate four main fish characteristics: maximum size, type of food, habitat preference, and body shape. We evaluated kelp density and substrate rugosity to analyze its association with the diversity of functional groups. Also, we calculated the fish density to understand their role within the same ecosystem and between the two types of ecosystems (4).

In the rocky reefs, six functional groups were formed by one species, while in kelp forests only three groups had a single species, suggesting that kelp forests may be less vulnerable to possible disturbances. Habitat characteristics, like the density of macroalgae, are important to establish more functional groups and help explain differences within the same ecosystem.

This work was part of the MSc thesis of the senior author who was supported by CONACYT grant (CVU: 476805). The project was partially supported by CICESE (Ref 622143).